Peloton - The Story Behind The Story

On November 21st, Peloton, the indoor bike startup, released a holiday ad with relatively little response from the market. But, about 1.5 weeks later, the ad went viral, with many online accusing Peloton of sexism or short-sightedness in the creation of their ad campaign. As a result, the company’s decreasing stock price has reduced their valuation by over a billion dollars.

In an interview with the Today Show on December 8th, the female actress in the ad noted that she was unaware as to what caused the sudden attention to the ad. Peloton eventually responded directly to various media publications, asserting that the ad had been misinterpreted. They also tried to exhibit on-going support from their customer base by sharing positive emails and Facebook posts that they had received.

The Yonder team wanted to understand how this conversation spiraled out of control for Peloton. What or who was behind the sudden burst of attention surrounding the ad? What was their sentiment and how did it spread so quickly?

Below is a de-brief we created using the Yonder Narratives solution. Like us, we think you will be intrigued by how the Peloton narrative rose up and spread.

Yonder's Founder & CEO explains how you can protect your brand equity and grow your business with an understanding of how hyper-active interest groups called factions start and spread trends online.

Though the Peloton holiday ad was released in mid-November, social-media conversation around the commercial didn’t see any significant increase until December 2, when posting volume on Twitter increased eight-fold compared with the previous day. 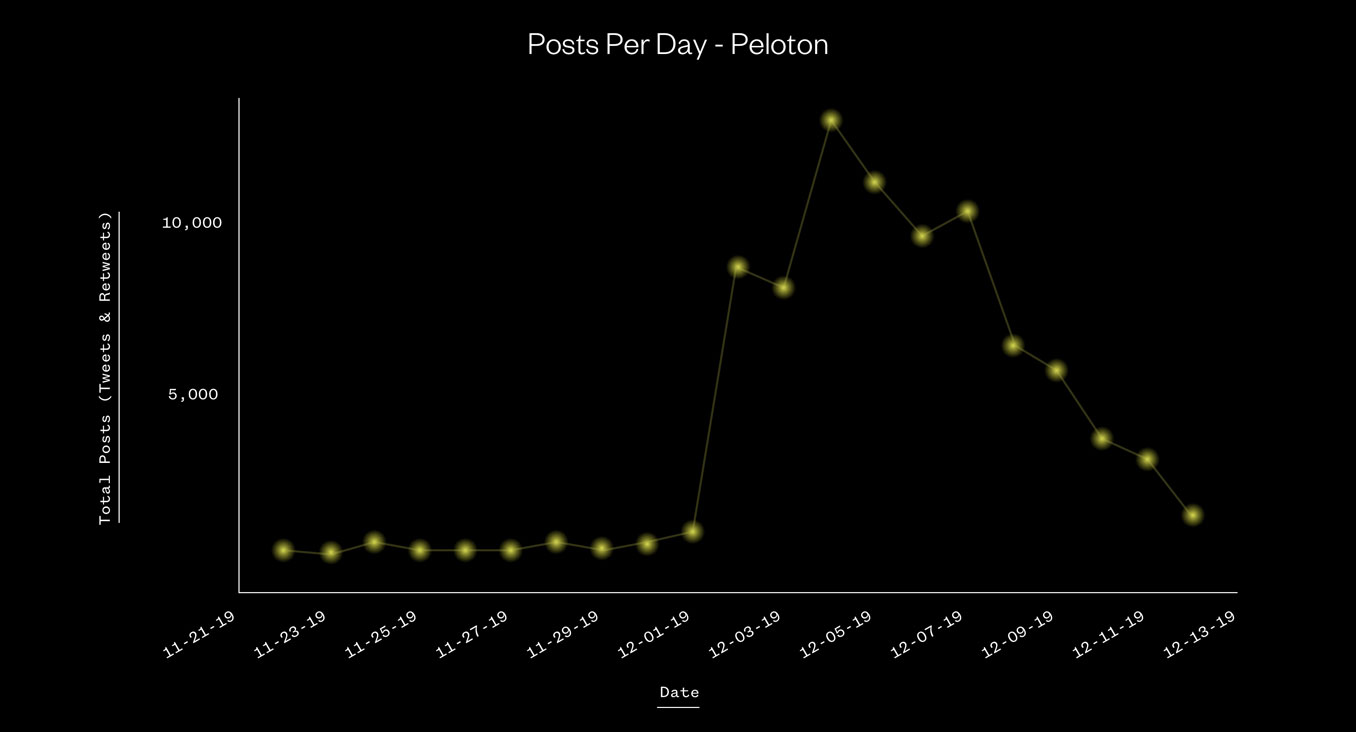 On that same day, we observed a significant spike on our Crisis Index — a proprietary metric that indicates when a narrative (or online conversation) begins a drastic increase in volume driven by a small number of highly motivated users. We often view this as the early stages of a false trend. 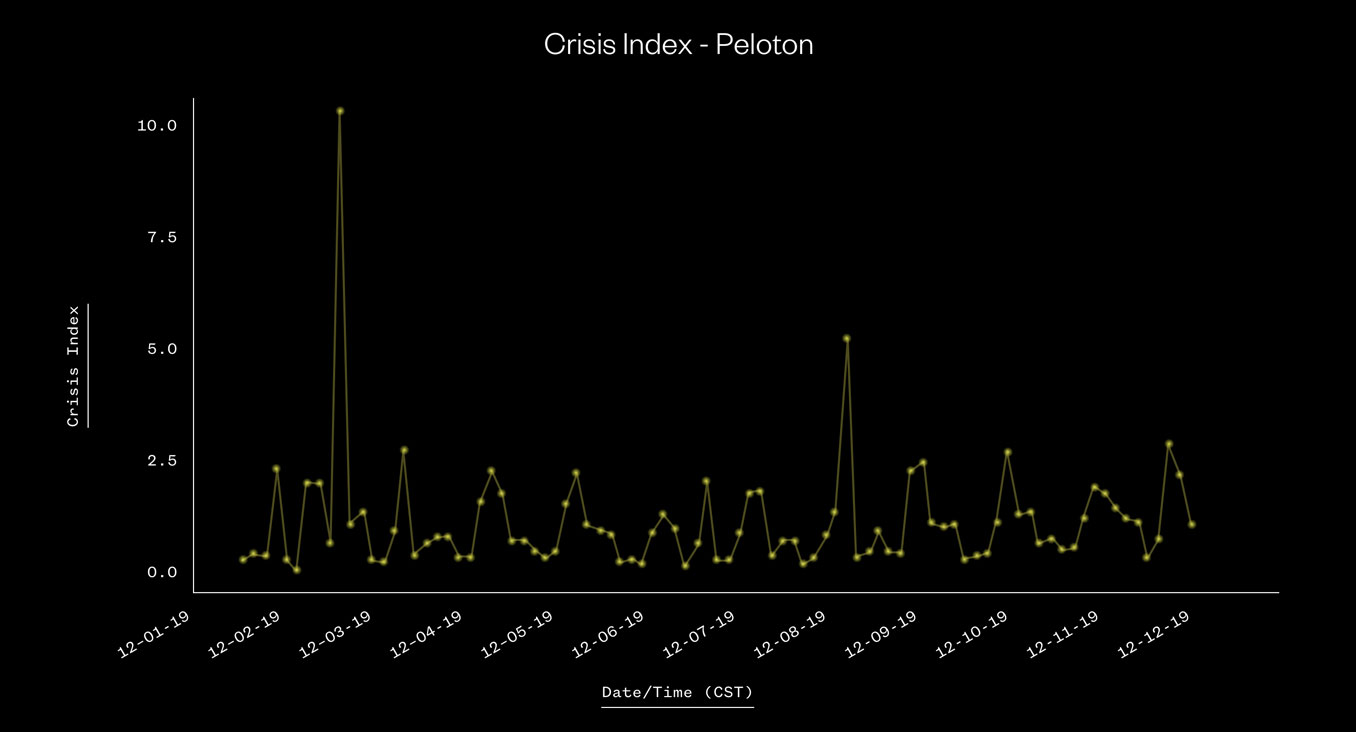 Looking further at how the crisis unfolded over time, this brief moment of drastic volume increase driven by a small number of high-impact users left a lasting effect on the sentiment and volume of posts about Peloton for the days that followed: 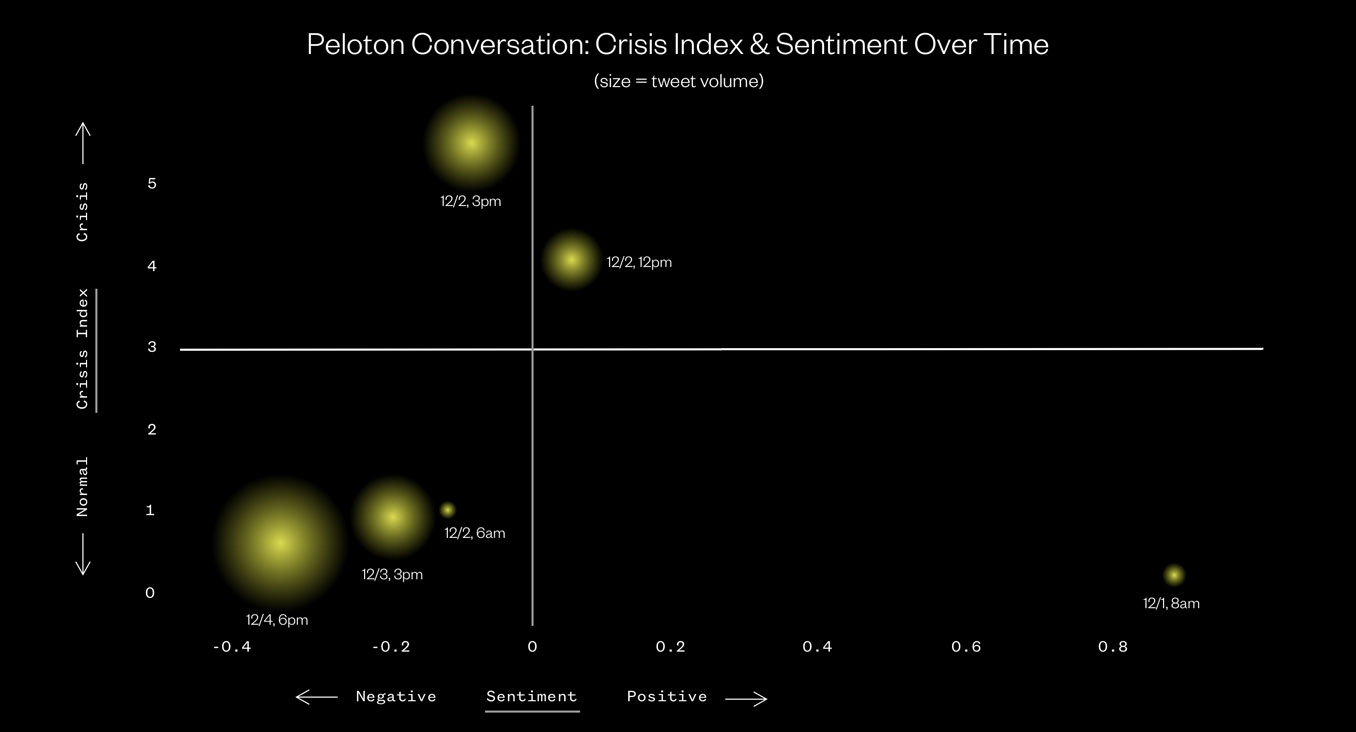 We dug into the posts during that period of “crisis” and discovered that a mere four accounts were responsible for multiple high-engagement posts (at least 100 likes, replies, or retweets) during that time. If this video went “viral”, these were the “carriers” bringing the virus to the broader online community. Before they amplified the outrage, few people knew or cared.

For example, the first post to garner a large number of engagements during that time period came from TV writer and author, Bess Kalb. 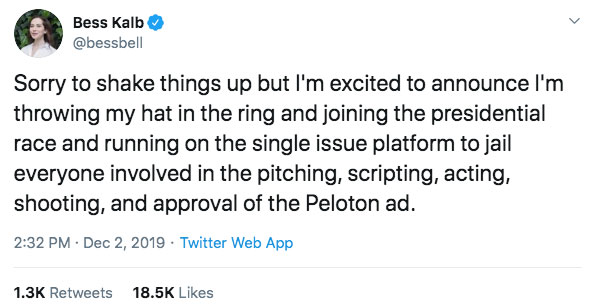 Bess Kalb was not the first person to tweet critically about the ad, though. Rather, theirs was the first post during a time that saw the conversation drastically increase in volume at the hands of a small number of users. In other words, this is the account that kicked off the trend.

Of course, Kalb did not single-handedly drive the virality of the Peloton ad. In fact, this was their only thread about the ad. Other “carriers” helped the ad go viral. For example, this post just an hour later from NPR producer Renee Klahr received over 6,000 engagements. 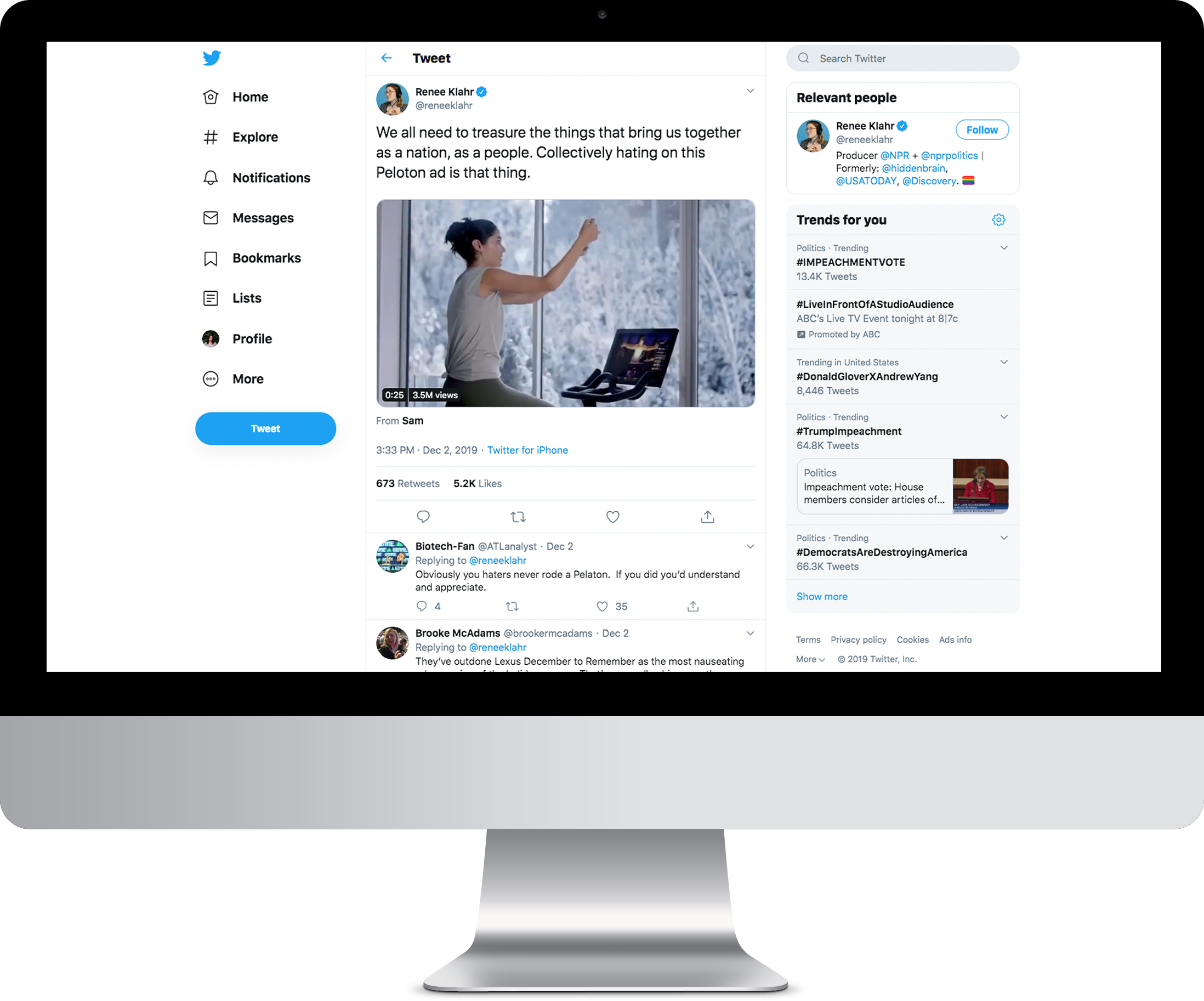 The virality was also helped along by noted Twitter troll, @ComfortablySmug. Though this account (who has 159,000 followers) had no posts that received thousands of engagements, they had an entire thread of posts, most of which each received hundreds of likes and retweets during the time that the trend was on its steepest rise. 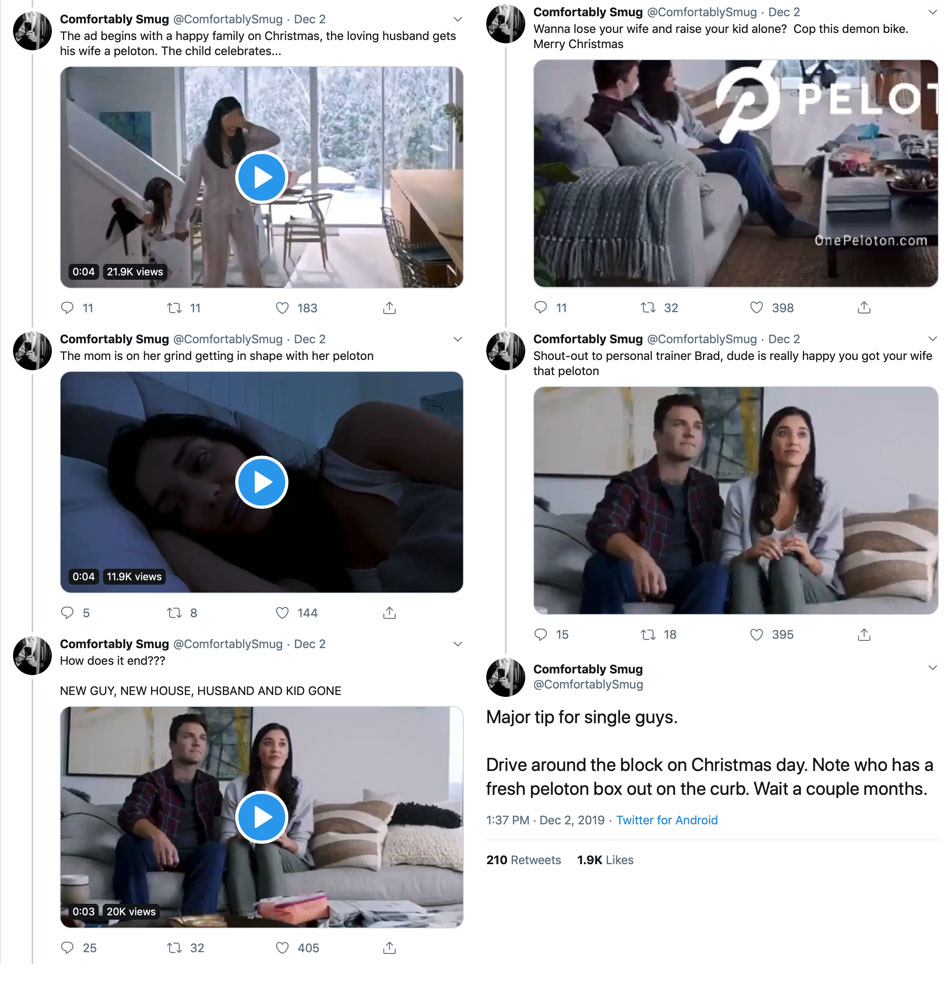 As important as these three users were in driving the trend, none of them were Patient Zero. If you look closely, you can see that both @ComfortablySmug and Renee Klahr picked up this viral narrative from the same source. 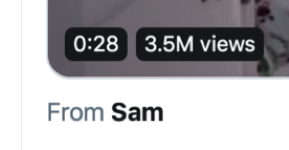 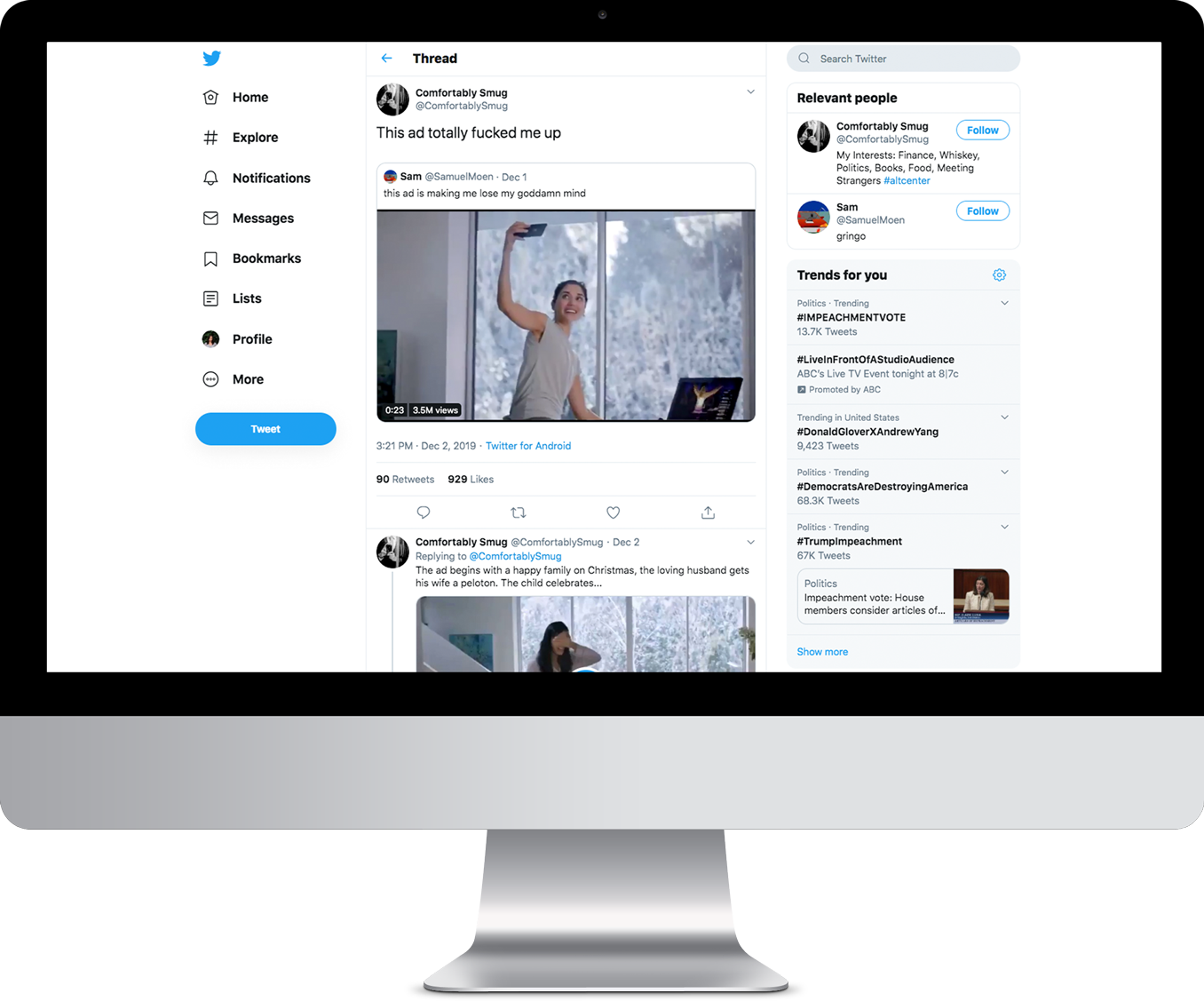 @SamuelMoen appears to be the source for two of the top three trend-drivers. “Sam” is an anonymous account whose posts are relatively infrequent and rarely receive more than a couple dozen engagements. However, Moen has received public attention in the past for their Twitter activity. A 2014 piece in NYMag interviews them about “Jokes that work better on Twitter”.

It’s important to note that though “Sam” tweeted first and does have a following on Twitter, it was only after their tweet was amplified by higher-profile users like @ComfortablySmug that the conversation around Peloton took off. Of course, that didn’t stop Moen from taking credit for launching the narrative, explicitly gloating about the financial damage they had caused.

We typically see this amplification begin in a faction — a community of like-minded or otherwise connected users that inhabit one or more social platforms. Narratives tend to bounce around within factions before they gain enough traction to spread to other factions, and eventually the mainstream. But this Peloton ad seems to have struck such a nerve that when a handful of high-profile accounts shared their distaste for the ad, the narrative accelerated rapidly and began to trend almost instantly.

Peloton is a perfect case study for understanding how narratives go viral and how social listening falls short of explaining that process. It takes more than counting posts to determine influence. Yonder’s advanced analytics and knowledge of internet culture allows us to quickly hone in on Patient Zero and the online factions that bring narratives from their respective corners of the web to mainstream awareness, even virality.

Yonder's Founder & CEO explains how you can protect your brand equity and grow your business with an understanding of how hyper-active interest groups called factions start and spread trends online.